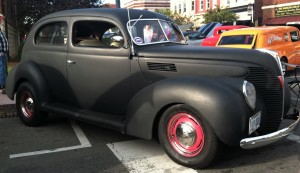 A native and lifelong resident of McMinn County, he was the son of the late Raymond “Cuz” and Wilma Louise Carter Womac and was preceded in death by his wife, Phyllis Elrod Womac.  He was retired from Mayfield’s as a transport driver and was known as “Transtar Charlie”. Charlie was a member of the Athens Travelers Car Club and the Rough Riders in Etowah.  He was proud to have been one of the first students to attend City Park Elementary School when it opened in 1953. Charlie was a member of East Athens Baptist Church.

Survivors include his son,

One sister and brother-in-law,

Sherry and Randy Tallent of Athens

One brother and sister-in-law,

Stan and Linda Womac of Englewood

Funeral services will be 7 pm Wednesday in the chapel of Ziegler Funeral Home with the Rev. Alex Thompson and Rev. Jerry Stephens officiating.  Burial will be 11 am Thursday in McMinn Memory Gardens

The family will receive friends from 5-7 pm Wednesday at the funeral home.

If you are unable to attend the visitation or service, sign the online guest registry at www.zieglerfuneralhome.com.

Ziegler Funeral Home has been entrusted with the care of Charles “Charlie” W. Womac.

To send flowers to the family or plant a tree in memory of CHARLES 'CHARLIE" W WOMAC, please visit our floral store.