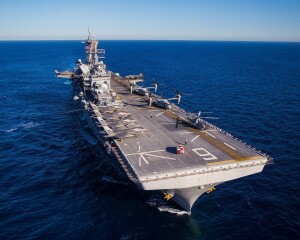 A native of Ellis, Kansas and longtime resident of McMinn County, he was a son of the late Leo and Stella Landauer Riedel.  He was preceded in death by son Nicholas Lee Riedel and sister Marlene Olheiser.

Charles was a member of Saint Mary’s Catholic Church and the Knights of Columbus.  He retired from the U.S. Navy after 22 years with the rank of Chief Warrant Officer 4.  He served on both the U.S.S. America and U.S.S. Enterprise.  Upon his retirement from the Navy, he was employed with Cleveland State Community College as a Computer Analyst for over 26 years.

He is survived by his

Sister Rita Duncan of Aloha, OR;

Brother Gordon Riedel and wife Debbie of Happy Valley, OR;

Sisters-in-law Lucille Burke of Athens, and Jane Johnson and husband Bill of Athens;

Funeral Services will be at 2:00 PM Friday January 22 at Ziegler Funeral Home Chapel with Deacon Albert Forsythe officiating.  A Rosary will be prayed at 1:30 by the Knights of Columbus.  A graveside service will follow at the Riedel Family Cemetery.

Serving as pallbearers will be Johnny Dawson, Douglas Riedel and DJ Riedel.

The family will receive friends on Friday from 12 PM until 2 PM at Ziegler Funeral Home.

If you are unable to attend, you can sign the online registry at: www.zieglerfuneralhome.com.

Ziegler Funeral Home has been entrusted with the care of Charles “Chuck” Riedel.

To send flowers to the family or plant a tree in memory of CWO4 Charles “Chuck” Riedel USN (RET), please visit our floral store.