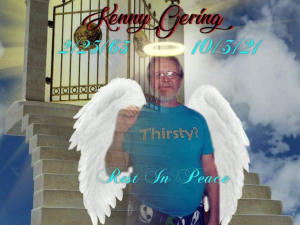 Kenny was a native of Wyandotte, MI and lived in Monroe County since 1998.  He was a son of the late Jacob and Zonta McCloud Gering.  He is also proceeded by sisters Judy Banks and Sue Miller, brothers Alan Gering, Danny Gering and Rick Gering.

Kenny was a former foreman for Home Sweet Home Quality Home Improvement and Landscaping.  He was a simple guy with a big heart.  His family was his life.

Kenny is survived by his loving wife of 28 years Carrie Haas Gering of Madisonville;

Daughters April Scroggs and husband Carl of Madisonville, and Diana Croft of Philadelphia;

Funeral Services will be at 3:30 PM at Ziegler Funeral Home.

If you cannot attend the visitation or funeral service, you are encouraged to sign the online registry at: www.zieglerfuneralhome.com

Ziegler Funeral Home has been entrusted with the care of Kenneth Dean ‘Kenny’ Gering.

To send flowers to the family or plant a tree in memory of Kenneth Dean 'Kenny' Gering, please visit our floral store.